Today Jobava faced the current World Junior Champion GM Parham Maghsoodloo in the sixth round of Abu Dhabi Masters and it turned into a very creative, tactical and sharp game.

“This game was a continuation from last night’s final rounds’ blitz game where I also faced Maghsoodloo with the white pieces. Yesterday I played d4 as the first move but I felt today that with d4 he has so many options such as the classical lines, Dutch and Grünfeld, where he beat me once in Iran. So I guess Maghsoodloo expected me to play d4 again but I went for e4 instead because I know he usually responds with either e5 or c5. He went for Sicilian and then I did 2. Nc3 in order to avoid the sharp Najdorf lines. Who knows what could happen then…? (laughing). Before this game I carefully studied a book on the Sicilian system that I played and from there I found some fresh ideas”, a cheerful Jobava said who clearly had enjoyed the game.

Below you can watch the full interview.

Both players played very well and precise until a critical position at move 26 when Maghsoodloo played the dubious e4. Jobava claimed this was the losing move and suggested Rc8 instead to keep the tension in the game. 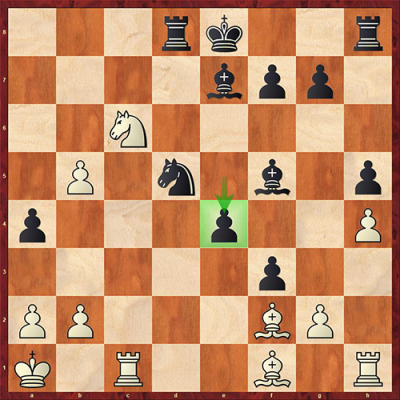 Jobava – Maghsoodloo. The position after 26..e4

This was Jobava’s sixth straight win and he is playing almost as impressive as in the Olympiad 2016 when he stunned the chess world with some amazing and memorable games.

The 7th round is played tomorrow on August 8 at 16.00 where he will be facing China’s GM Ni Hua (ELO 2668). Can he make another win? Surely with this form Jobava is showing he must be regarded as the clear favourite although he is playing with the black pieces… Watch the game live at Chess24 or Abu Dhabi Chess Festival.