I received a special invitation from my sponsor Mobile Labs to play Deltalift Open in Sweden. It is a traditional tournament played at the Swedish west-coast, located right at the beach close to Halmstad in a small village called Tylösand. The owner of the hotel is in fact the former member of the pop-group Roxette, Per Gessle.

The tournament has a different format, with a combination of four rapid games and four classical games played during three days. First day I did 3.5 out of 4 points which was a decent start because I did not play rapid games for quite some time. And it was a good warm-up prior to the classical games that started on the Friday.

In the 5th round and the first classical game, I met the talented junior FM Kaan Kücüksari, originally from Turkey but now living in Sweden. We played the Petrosian system which was my main weapon 10 years ago. I did not play this system for a long time, but still I know the ideas very well. In the middle-game he made one major positional mistake. When we exchanged knights on the d5 square, he should have recaptured with the light-squared bishop instead of taking with the e-pawn. After this his bishop became passive on b7 and his king-side became weak.

In the 6th round I met another of the young Swedish talents, FM Seo Jung Min. I was expecting some real battle but he decided to play the game in a very safe way. Then I went into a queen-endgame where I thought I had a very good edge, but it turned out that white could draw by force. He is calculating very quickly and he managed to find drawish resources. So in the end I was a bit disappointed that we reached a draw without a real fight.

Yesterday, Mobile Labs invited me and a few other of the tournament players to a beautiful restaurant , Restaurant Salt, right at the shore, where we enjoyed the sunset and some nice food. Perhaps this was the source of my inspiration today, because I woke up with a good feeling, knowing that I would play something interesting in the game. I faced FM Erik Malmstig in the 7th round and I think his choice of opening against me was incorrect because in this Italian system I have huge experience against top level players. A few years ago I also invented a few new ideas in this system. It is like playing the piano without any notes :).

In the middle-game there was a critical moment for black where he played 17…c5? After this move he creates a few weaknesses on the light squares and white gets a huge advantage by force. Instead, he should have taken the pawn on d4 and then white has two options with recapturing with the knight or with the pawn.  E.g. 17… exd4 18. cxd4 Nd3 (with tempo attacking the rook) 19. Re3 Nb4. The black knight is now taking control of an important square. So I probably would have chosen 18. Nxd4 instead. Black more or less has a decent game. 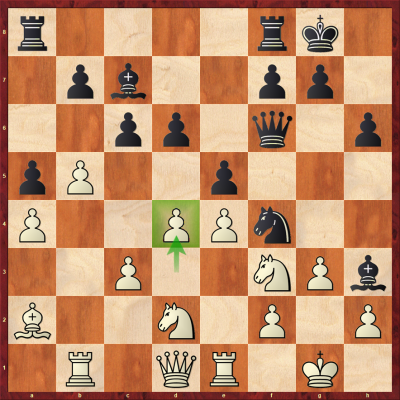 Black then made a decisive mistake at move 20 when he played Ng2. Only chance to keep the game alive was to withdraw the knight to Ng6 and try to defend the position. But white still has a big advantage on the queen-side and controlling the important d5 square. The complete game is available at Follow Chess | Jobava vs Malmstig.

In the final round I was happy to meet GM Pia Cramling for the first time. She had 7 out of 7 so far with some brilliant games. It was her tournament. I chose to play the Trompovsky. The game became very sharp and complex. After 7. Nd2 the main line is c3 for black but she surprised me with Bxc5 which is considered to be less strong. After this we were more or less in new territory. After move 14…Qc7 the position was a bit dangerous for me, but I managed to find the critical 15. Ne4 followed up by a rook-for-bishop sacrifice. After 21 moves I offered a draw because I did not have any winning chances. In fact her position was slightly better but still very difficult to win for black. Watch the game at Follow Chess | Jobava vs Cramling. 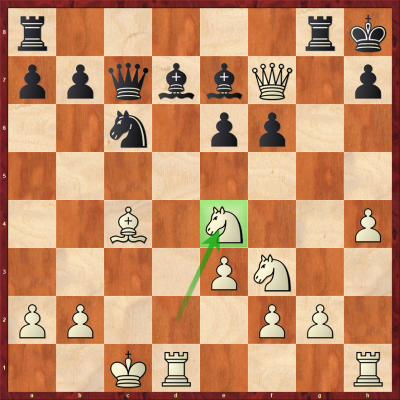 Jobava – Cramling. The critical position at move 14 where I found 15. Ne4.

Finally a big thank you to the organizers for a great tournament and the nice atmosphere. Congratulations to GM Pia Cramling who not only won the tournament with 7.5/8 but also shared first place with IM Pontus Sjödahl in the Swedish Grand Prix series. I ended up as the runner-up with 6.5/8 which was a pretty decent result for me and a great improvement compared to my previous tournament in Moldavia. My next games will be in France at the end of this month where I will play two games in the French Chess Team Cup for my French team Trembley. Until then!