With only 3 rounds left, Jobava was facing Egypt’s strongest player GM Bassem Amin in round 9 of FIDE Grand Swiss on Isle of Man.

Jobava chose the Sämisch variation in the Kind’s Indian Defense, followed by long-castle and preparing for an attack on the king-side. In move 12, Jobava deviated from any game played before, playing Nc1!? 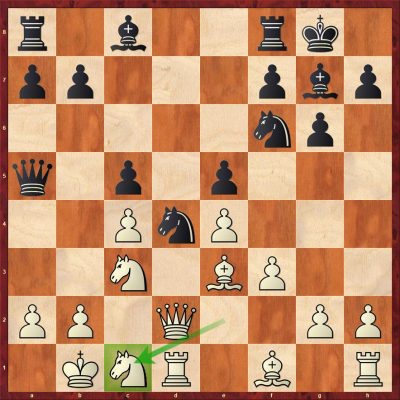 He also continued with re-positioning his black-squared bishop to the h2-a7 diagonal at move 14 and 15, aiming at black’s e5 pawn. It became a tough and complicated middle-game battle where both players faced time-trouble before the time-control. After Jobava’s Rxe3 at move 38, Amin could have responded with the beautiful Rd5, but instead he exchanged the knight for the bishop on b5. Just after the time-control, the position was drawish and the players agreed to a draw.